Life’s Been Good To Me So Far… 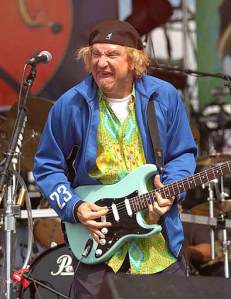 Joe Walsh... the epitome of the bloated, addle-brained rock star...

8 days until my sonic imprisonment begins…

Going to see DEVO is really just an exercise in nostalgia. I think what the kids don’t realize is that back in the day none of us wanted to go see Devo.  Sure, you might sit through a show when they opened for someone (like I did with Flock of Seagulls when they opened for The Police) — but back then MTV was actually fresh and cool, and Devo had a few good videos that we all enjoyed, but that was pretty much it.  Now, if they have decided to have some sort of 80s panel at Coachella, during which they show Devo videos along with maybe Kim Carnes’Betty Davis Eyes and Video Killed The Radio Star, I’d be happy to follow up with an in-depth explanation of the cultural importance of Ferris Bueller’s Day Off, but otherwise I think I’m going to skip Devo.

Grammatical issues aside, I have to take this band seriously because it is Dave Grohls new endeavor and it will surely be on Tubbs’ Coachooser.  But as I listen, I’m already thinking that Them These Those Crooked Vultures seem to lack a relevance factor.

Two song titles include Scumbag Blues and Caligulove. Really?  I can see them sitting around Dave’s home studio just giggling at the genius of those titles.  This is what happens when overinflated egos collide with arrested development.   It just feels too cute somehow.

The thing that made the Foo Fighters great was that they emerged from the wreckage of KC’s death all raw and real.  They were full of emotions that couldn’t really be articulated because they were too fresh.  Believe me, I’m not saying that rich rock stars have to just disappear into the abyss or become recluses in their mansions –  but there is something to it.   The only alternative is to become self-aware about the whole thing, the way Joe Walsh does.

As I listen I find myself asking what’s their pain?  What are they angry about? Where is the quiet pathos or the screaming anger?  Where is the context?  Now that I think about it, what do they have to be angry about?   Nothing.  And maybe that’s the problem.

I suppose I will have to go to this, but fingers crossed they’re on at the same time as Florence+The Machine because I’d rather hear the rantings of an emotional twenty three-year-old who thinks she’s got it all figured out, than the self-important musings of a bunch of millionaires.